After battling a rare form of cancer, my grandfather passed away on Wednesday evening at 10:59 pm. I was with him when he passed and, though it was difficult to watch him struggle in the hours before, I felt that his passing was peaceful and easy. In those last 20 minutes, he just settled. It was like falling asleep; he stopped gasping for air, his breathing returned to a natural, steady rhythm, and then he was gone. It was that smooth.

Though the loss is painful, I was glad that it happened so easily. I didn’t want him to be in pain any longer and I like to think that in those minutes he was at ease. He was not a perfect man, but he was loving and caring and he was a stubborn old goat who had a gift for opening up and telling stories no matter who was listening. I didn’t see him often enough, but in the last two years I lived closer to his home and was able to spend more time with him on the weekends. Though we had our differences when it came to certain beliefs, he always believed in me and made sure I knew it. I said goodbye to him on Saturday when I stopped by his place to pick up my aunt before taking her to the airport, and that was the last time I heard his voice.

He never gave me presents because he was a practical man and figured money was a better gift than an object, so I have few things to remember him by–an antique bracelet he found at a garage sale a couple of years ago, an old shoeshine box that he found and knew I would like (we shared a love interesting of wooden boxes), and an old hammer with three mismatched screwdrivers, things he knew I would need when he wouldn’t be there to help. Then there are the plants–my whole garden came from his, a living tribute that I have been worrying over for the last year and a half as the harsh, unpredictable weather tries to beat my efforts.

He uprooted his life and left his homeland to escape communism. He watched his family grow. And he made sure we were always looked after. When I had to have emergency surgery three years ago, he was the one who watched over me while my mom was at work, and when I moved out, he was the first to come inspect the place. When I met Edward, he was one of the first to approve, and when I graduated and became a librarian, he made sure I knew he was proud.

I have few pictures of us together because I was often the one behind the camera, but last Christmas I made sure to take one where we were together. However, my favorite pictures will always be those that my mom brought with her from Cuba, the ones where he looks like an old time movie star, and this one where he’s doing what he loved best–climbing and fixing things: 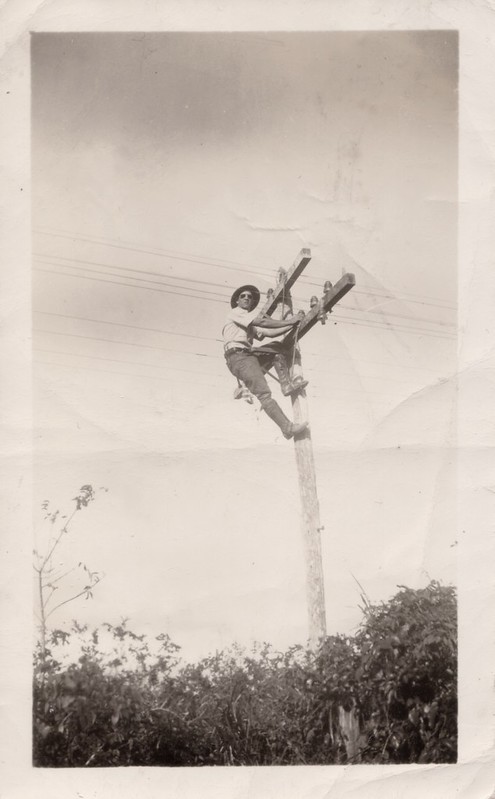