One of those rare pictures of myself… mostly because I want to show off my Mandarin top. What other job would support my love of costumes and playing dress-up? 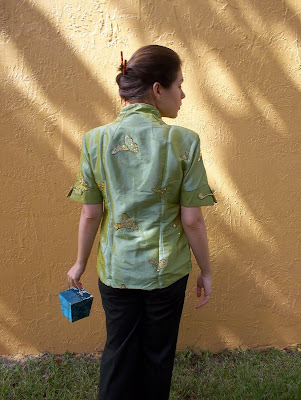 Also received a lovely calligraphy print from one of our Chinese students. The characters on the left represent my name, while the others represent a series of phrases… the order of which I can’t remember, but which amount to something like good fortune, prosperity, and happiness. 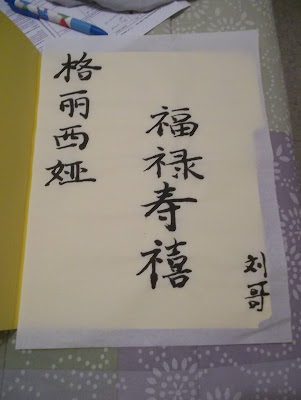 In the last month, I’ve run into several people that I knew when I was in high school and this has prompted me to think about who I am and how I’ve changed since then. So here’s a reflection of me in the last (almost) 10 years.

I got my first computer! Yipee! (and free interwebs for a year, now that was a deal)

I was diagnosed with hypothyroidism.

My greatest concern was having enough save to buy whatever cd/movie/accessory I wanted.

I was very into science and wanted to be a forensic pathologist when I grew up.

I was just getting very into David Bowie and Sarah Brightman.

I was becoming very interested in the Victorian era and period films.

I am no longer a computer novice. And I spend more time on the interwebs than watching tv, hence why I got rid of my tv with the Dtv switch.

My hypothyroidism is under control, but I just found out that I have the knees of a much older woman… or a grandma. Apparently, it’s genetic.

My greatest concern is my lack of funds and all that arises from that.

I have an MA in English and am working on an MLS in Library & Info Science. That’s about the only science in sight right now.

I still love Bowie and Sarah Brightman, though my musical horizons have expanded considerably (thanks to the web).

I have read too many Victorian novels and watch far too many period films.