I will be turning 29 next week and while I may not be one to harp on age, there is a sense of “oh my goodness, I’m an adult now” that has marked the choices I’ve made this year. Sometimes, it’s a bit overwhelming to have to fend for myself, so I decided to do something completely indulgent and buy myself a present, one that serves no real function or purpose except to make me happy. 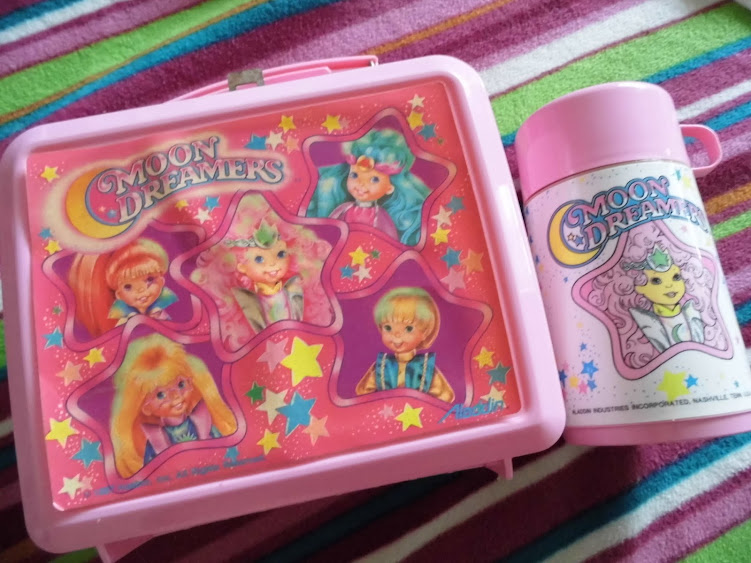 So why does an old lunchbox please me so much? It all started when I went off to school for the very first time, MoonDreamers lunchbox in hand and a thermos full of spaghetti inside. I remember having lots of spaghetti for lunch as a kid, until I ended up on the school lunch program after my mom started working again. I loved my lunchbox. I remember carrying it proudly to the cafeteria, swinging it as I walked in line with my fellow classmates. I didn’t always love what I found inside, but the cool factor of having a lunchbox with cartoons and glow-in-the-dark spots was worth it.

I must’ve loved the MoonDreamers too, though I always wonder just how much I really understood. You see, I only spoke Spanish until I started going to school and was thrown off the deep end into English. Somehow, I managed to make meaning while watching that show, and that lunchbox cinched it.

My mom gave my lunchbox away after I started receiving school lunches. I didn’t realize the loss until I was older and by then it was too late to get it back from my cousins (to whom most of my things went). This isn’t the box I had–mine was blue–but it makes me smile all the same.

The more papers, theses, and dissertations I review, the more I find myself yearning for the kind of theoretical literary intellectual wank-fest I used to engage in when I was in grad school. Don’t get me wrong, I don’t miss the deadlines or the stress of term paper time, but I do miss those group discussions when everyone bounced ideas around in class/behind the library/or around a cafe table. I miss deep, often pointless intellectual conversations where we all think we’re onto something truly original and inspired. And I miss theory. Good lord do I miss being able to think in theoretical terms and write up complex gobbledygook that makes me sound brilliant (or slightly mad). I also miss having heated debates on women’s issues and feminism. It’s been too long since I’ve been in an environment with women (or men for that matter) interested in discussing gender and society, whether literary or real, with some level of understanding. I love working with students, but sometimes I just crave a good conversation with someone like-minded and, let’s admit it, grown-up. Maybe I just miss adult conversation that does not involve work or relationships, that isn’t weighed down by the need to explain what I mean. Someone slap me with some information!

My birthday is on Monday, and I’ve been thinking of all the changes and things I’ve experienced during this past year. Therefore, I decided to compile a list of my accomplishments… because it is the sort of thing that I do.

What she had to say…

NPR did this music blog asking people what albums got you through your teenage “angst” or were cathartic when all that mayhem was going on.

*Note: not necessarily my top albums, just the ones on replay.

These are the ones I can think of at the moment, but I’m sure there were plenty more. I remember these sitting in my cd players for days at a time.

When I was a kid, there were several movies that had a big impression on me and really inspired my creativity and imagination. Among these were Labyrinth, The Neverending Story, Legend, and The Princess Bride (and those Ewok, Star Wars spin-off movies). I loved fantasy and I was particularly interested in mermaids and old-timey country girls, hence my mild obsession with anything mermaid related and Heidi.

Before Disney’s The Little Mermaid was released (the first movie I remember seeing in a theater), my mom bought me a VHS copy of a strange anime version of Hans Christian Andersen’s “The Little Mermaid”. And, thanks to the magic of YouTube and ingenious uploaders, I have found this little piece of nostalgia… coincidentally, this was also the first anime that I ever watched.

Well, not quite, though it is a case of “when I was your age”. I was reading the text for the reference course that I’m taking and came across a sentence that mentioned the “eight planets of our solar system” and I realized that this is one of those facts that have changed for students in school today. I remember when our solar system had 9 planets. I also remember reading about the USSR until I was in second grade. Seems so insignificant, but it shows how “facts” are always changing.

In the last month, I’ve run into several people that I knew when I was in high school and this has prompted me to think about who I am and how I’ve changed since then. So here’s a reflection of me in the last (almost) 10 years.

I got my first computer! Yipee! (and free interwebs for a year, now that was a deal)

I was diagnosed with hypothyroidism.

My greatest concern was having enough save to buy whatever cd/movie/accessory I wanted.

I was very into science and wanted to be a forensic pathologist when I grew up.

I was just getting very into David Bowie and Sarah Brightman.

I was becoming very interested in the Victorian era and period films.

I am no longer a computer novice. And I spend more time on the interwebs than watching tv, hence why I got rid of my tv with the Dtv switch.

My hypothyroidism is under control, but I just found out that I have the knees of a much older woman… or a grandma. Apparently, it’s genetic.

My greatest concern is my lack of funds and all that arises from that.

I have an MA in English and am working on an MLS in Library & Info Science. That’s about the only science in sight right now.

I still love Bowie and Sarah Brightman, though my musical horizons have expanded considerably (thanks to the web).

I have read too many Victorian novels and watch far too many period films.

I am a huge Bowie fan. Anyone who knows me really well knows that my obsession can be a bit much at times. So, a couple of weeks ago I went on a closet cleaning frenzy and did what I had been threatening to do for ages: I uploaded all by Bowie albums onto Cassius (Cassius being my iPod. That could be read in so many ways, otherwise.).

Now, I love Bowie and every so often I feel like I rediscover him again. For example, when I’ve gone for months without listening to a certain song and I hear it and remember when I first heard it. It’s like re-reading a favorite book, or watching a movie you loved as a kid (though that didn’t go very well for me when I watched “The Little Mermaid” as an adult and realized how very inappropriate it can be. Still love it, but can’t help but be a little struck by the fact that Ariel is only sixteen… but I digress). Anyhow, I put Bowie on a loop, all 253 tracks. For about 2 weeks. It was supposed to keep me alert while writing, but even I am a little sick of it now.