Have been more than a little overwhelmed with event planning and outings during the last couple of months, am hoping for a reprieve soon. However, all this event planning has led to some neat discoveries… including an addition to my lucky cat collection 🙂 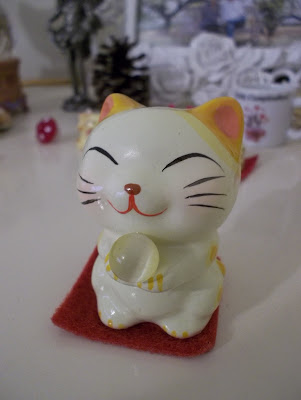 I don’t usually write makeup or product reviews, but as someone who looks up reviews before making purchases, I thought I might as well contribute one.

I’ve been using LORAC’s ProtecTint for the last couple of years because I like a bit of color to even out my skin, but don’t like using foundation unless I’m going out and want to be fully made-up. However, I am an underpaid grad student with an unfortunate case of bills, so pricey makeup is not on the list of things I can properly afford at the moment. My LORAC supply is woefully depleted and I don’t want to purchase another tube at the moment, so after reading a few reviews, I thought I’d give Aveeno’s Positively Radiant Tinted Moisturizer a shot. Like the LORAC, it has 30 SPF, which is something I really desire in a moisturizer given the scorching South Florida sun.

Aveeno’s tinted moisturizer comes in two shades: Fair to Light, and Medium. I purchased the Fair to Light and found that it was a bit heavier in color than I had expected, though it did blend nicely and evened out my skin tone fairly well. The main drawback, it’s not as moist as my LORAC, so my skin felt a bit drier than I like… I will try layering it over my regular moisturizer next time. My next challenge… how would it fare in the summer heat?

After a few hours, I was surprised to find that it was holding up rather well and did not have that oily, slick feel that sometimes happens as a result of the combined effects of heat and humidity. It still felt nice and smooth.

Overall, it’s been a good first experience. It’s scented, but while I normally don’t like fragrance in my facial products, it’s not a bothersome scent. It’ll do for a quick fix until I can buy my LORAC.

I almost cried during my telehealth appointment. How’s your day going?
Happy New Year’s Eve y’all! Stay safe 😷💜
When you drive down for cinnamon rolls and run away from the line…
Hi all, fellow librarian found her neighbor’s body last week in a tragic turn of events. She is currently looking after the deceased neighbor’s cats and they need A LOT of care. It’s not known how long they were alone, so the bills are adding up. Please consider sharing and/or donating.