So glad to be back home, but still tired despite getting a full night’s rest. Two days of sleeping on my mom’s couch with three of her colony cats to keep me company means I’m still catching up on lost sleep and dealing with a crick in my neck.

A slow start to my week and another return to the vet, though this time for a planned visit rather than another emergency.

Slightly more rested today, so I managed to catch up on some of the project’s I abandoned during last week’s storm prep. Work writing, but no novel writing because the energy isn’t quite there.

Ordered some pizza for dinner with what I hope was vegan cheese (I really couldn’t tell and part of me suspects it wasn’t). My tummy will tell… Cheese aside, had a really weird moment where some random lady “literally” got up in my face before I could dodge out of her way—mask hanging from her ear and all. My anxiety could’ve done without a stranger invading my social distance bubble. In brief, it was a small pizza place, I was standing to the side, blocking the soda fridge so I wouldn’t block the register. Woman walked in, didn’t pause or give me a chance to shift before walking straight at me (it was three steps from the door to the fridge at most). I twisted away, but it was still too close for comfort on a day when the state reported more than 7000 covid cases. Not pleased.

Pizza was good though.

Much more productive today. Managed to get started on several projects between meetings and chat. I’m not mentally prepared for the start of Fall, if I’m being completely honest. I’m so grateful that I’ll be able to continue working remotely (and that’s a privilege I don’t take lightly).

Randomly, decided to sweep on some eye shadow. It was unexpectedly invigorating after nearly 5 months of 0/minimal makeup.

Just tired today. Kitty’s random cough/sneeze turned into a series of cough/sneeze attacks that concern me, so off to the vet tomorrow.

Kitty has to stay at the vet because they had too many appointments and she needs to be sedated to be treated (she vicious). My mind has been drifting all day and not having her around has me anxious.

On an ever-in-the-back-of-my-mind sidenote… I live in a tiny, privately owned apartment building that is attached to two commercial spaces (all under the same property owner). There’s been a lot of discussion about rent and evictions and everything that is happening in the world… I’m not in that situation, but I am constantly worried about the possibility that a) my landlords won’t be able to pay their property taxes (because 1 office and 1 apartment are currently empty, and they haven’t been able to keep their business going) or b) they die (because hello, hotspot). It’s a very real fear that rears it’s head at the worst moments and my “worst case scenario” personality has been spinning circles. I don’t feel sorry for my landlords — they definitely have more options than I do, but the possibility that they default on their taxes makes me nervous and definitely makes me feel sorry for me.

kitty had to spend the night at the vet’s because they were so swamped with cases(!). She’s so small, they just needed one xray (tiny nugget!)

Kitty came back home. She hasn’t sneezed or coughed since her treatment started, but we’re waiting on a radiologist’s report to see if anything is going on in her lungs. I’m hoping it’s a run-of-the-mill infection and not asthma or anything chronic.

Spent most of the day in a funk. Low energy and not much desire to get things done. I hate feeling this way, but it happens.

Started writing again, but it’s a VERY slow start. I don’t have the energy to focus and the mood I’m in isn’t helping. I don’t think August will be as productive as July. It’s also increasingly hot, which makes me feel lethargic.

To feel some sense of accomplishment, I organized the storage in my closet. Having one closet means that EVERYTHING gets stored in there and, while I don’t have that much stuff, it piles up when there’s only one shelf.

Products I don’t like, products that make my eyes hurt, regrets, lessons learned, and an update on my #ProjectPan!

Are you doing a project pan? How’s it going?

If you’ve been following the recent debate, you’ll know that Marie Kondo has sparked some feelings regarding books… I wanted to jump in and share my thoughts on the debacle.

Spoiler alert: I’m on the “it’s okay to get rid of books” camp.

Another month, another round of stuff I used up. 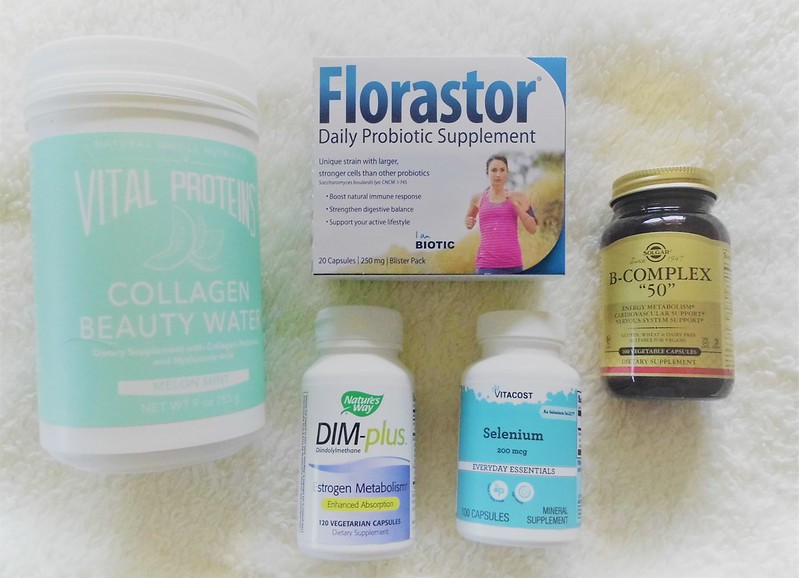 Kicking it off with the supplements… my doctor is in awe of my self-experimenting and documentation. 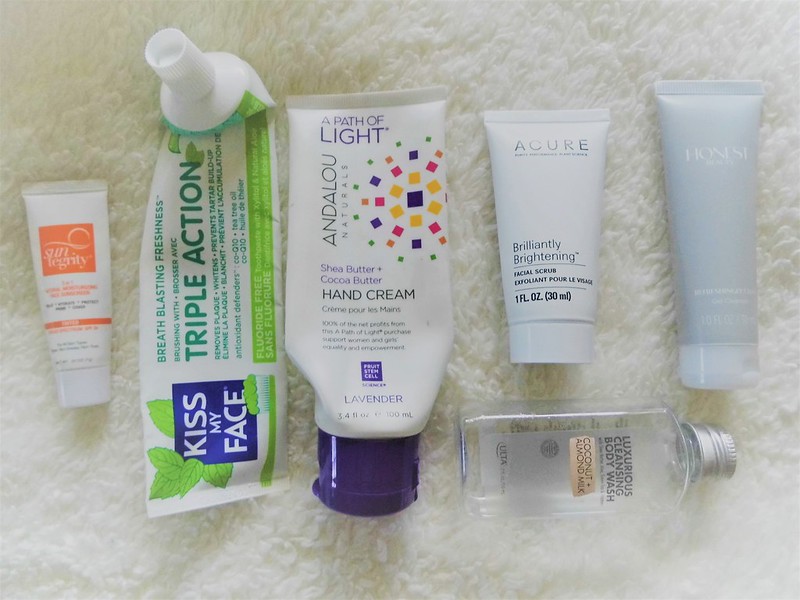 On to the products… 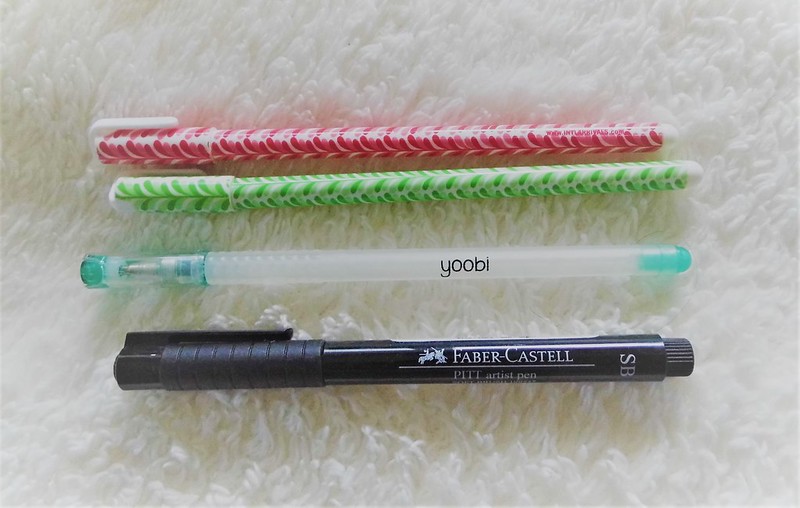 The red and green ones are actually declutters. I gave up on trying to use them because they were always scratchy and dry. They were part of a set that I plan to give away at work (where pens walk away on a regular basis). I used up the yoobi and the Faber-Castell was a mediocre brush pen for calligraphy that didn’t quite work out.

I’ve managed to keep a fairly streamlined collection since my first round of KonMari de-cluttering, but times change and things that sparked joy no longer spark. Rather than hold on to every thing, I’ve learned to let go and edit on a regular basis.

Here are the results of my latest round:

A quick review of my closet revealed a few items that I failed to reach for this winter, or which no longer fit as I prefer. The two smaller bags are items from my makeup collection that I cannot donate or share, and a few bits of paper and miscellany clutter that needs to go. 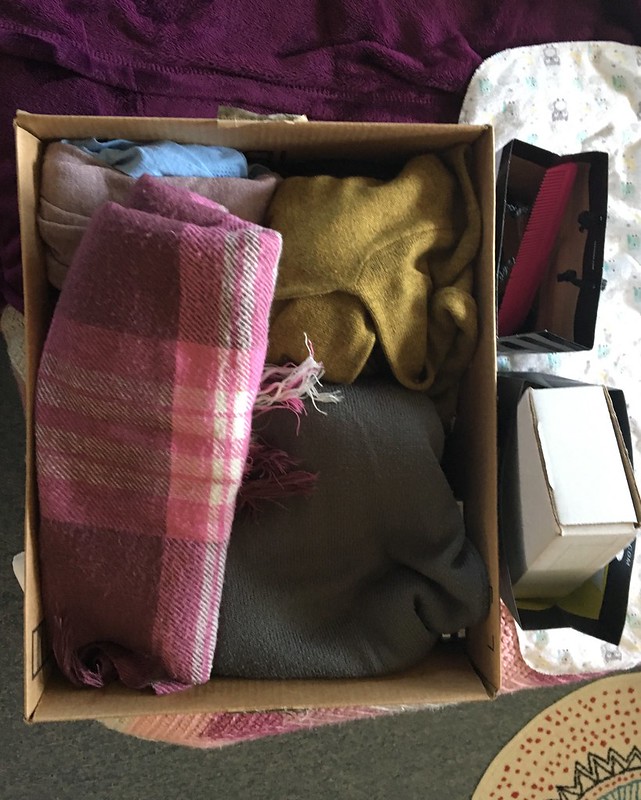 A review of my unmentionables revealed some items that no longer serve, whether because the fit is off or the fabric is too worn. 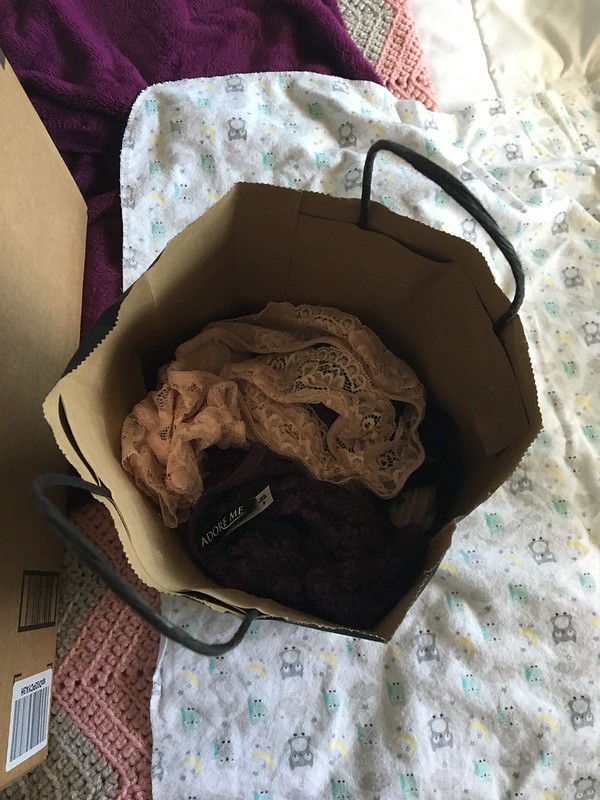 I use a diffuser to scent my home on most nights, but sometimes I just like the look and feel of a candle. Because candles come with jars, I’ve amassed a fair number of them. I’m getting rid of these, but looking to rehome or recycle where possible. 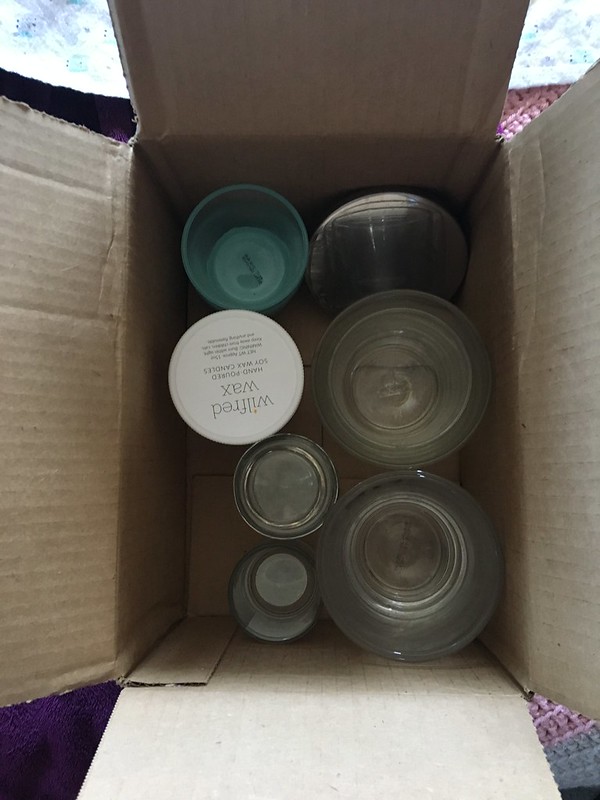 Decorative pillows and stuffed toys from the ikea bin. I have a weakness for cute pillows, but these serve no purpose beyond gathering dust. I traded them in favor of the toys and pillows that I do use (mostly to prop my arm up while I sleep). 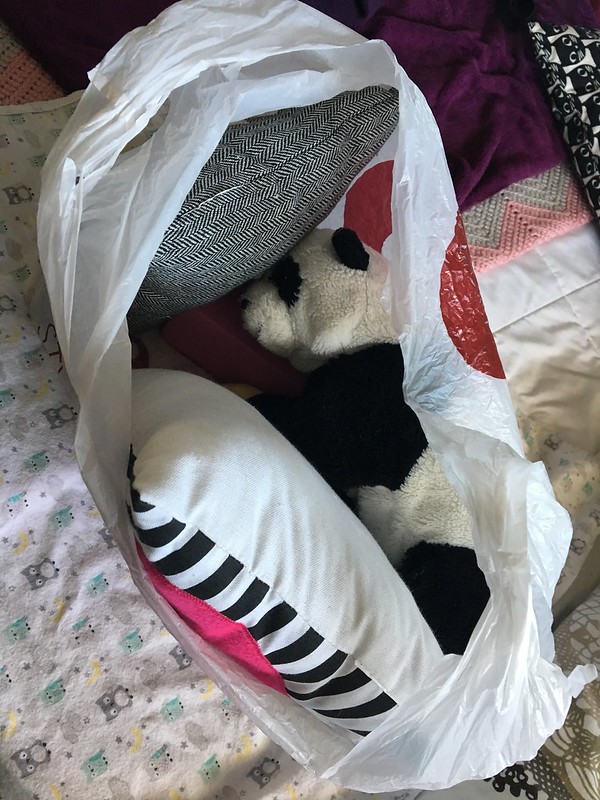 Not pictured: the freestanding mini elliptical machine I bought two years ago in an effort to move more during writing days and have an alternative to outdoor walks during the rainy season. I used it for a few weeks and found that I didn’t like it, but it was too late to return it. It’s too large for me to try to sell it, and I can’t stand seeing it gather dust. I set it on the curb and hope someone picks it up. It’s wasteful, but a lesson learned.

Another video in the minimalist transitions series.

Let’s delve into my closet for another round.

Not that anyone has asked, but these videos help me make sense of my belongings and aid in the process of decluttering :).

Also, post-video update: the white shelf is now gone and a simpler, smaller solution in place. Progress every time.

A few months ago, my mom unearthed my old cd collection. This is good, because it means she finally cleared out enough of her own stuff to return what was left of mine. However, there was something about sorting through those old albums that made it really hard to purge. It had been years since I played any of the cds in the box, but the thought of parting with them was extremely difficult. They were tied up in nostalgia and sentiment in a way that surprised me. So I left them in a box and let them gather dust for a few months.

Three, to be exact. I looked through them a couple of times, but couldn’t do it. Then, the day after the Garbage concert, I was ready. I knew what I needed to do and I did it. The result is a small collection of albums that were essential to my young adulthood, and includes those that I still enjoy today. I sorted them into three sleeve cases, and kept a handful of soundtracks for future library events and writing sessions. The rest, I donated. They’re gone and I’m free of the baggage (in more ways than one). 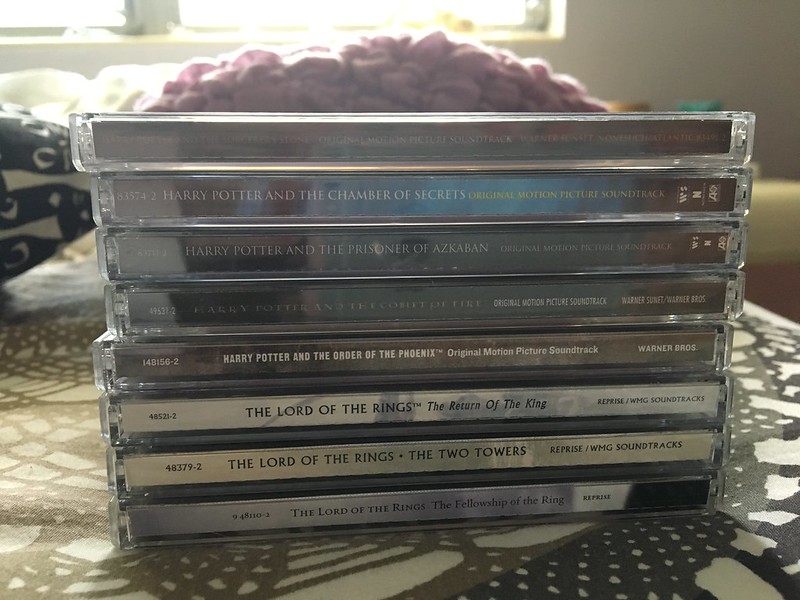 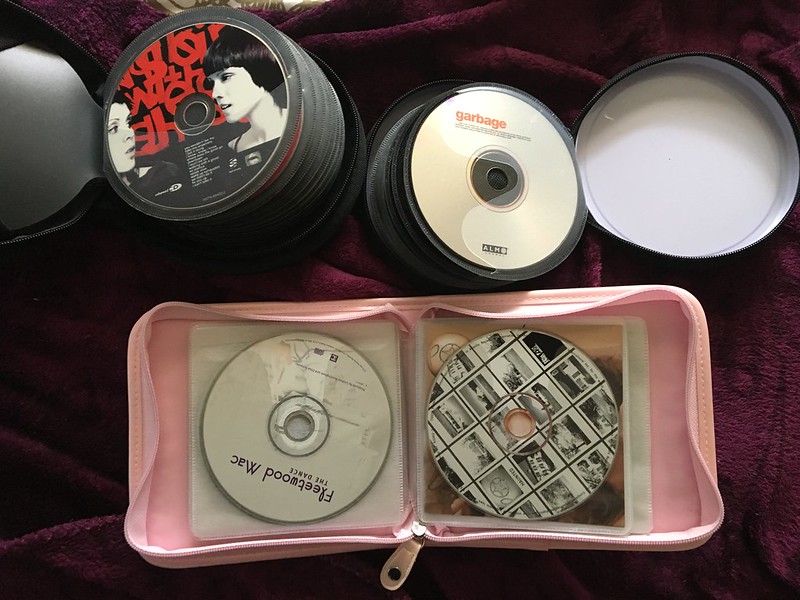 Another makeup declutter, and a new name for the series: Minimalist Transitions.

This is not the first time I’ve culled my bag collection, but it may be the most brutal. Though, perhaps not. These are bags I held on to the last time, because they were expensive or they had sentimental value or they might still come in handy. Except, I haven’t touched any of them in over a year (2-3 years for the last two). It’s time to stop holding on to things I don’t use.

I’m not sure if I’m going to try to sell these. I tried selling the pink one and it never sold. I haven’t the patience for ebay slow sales, so I may just donate. 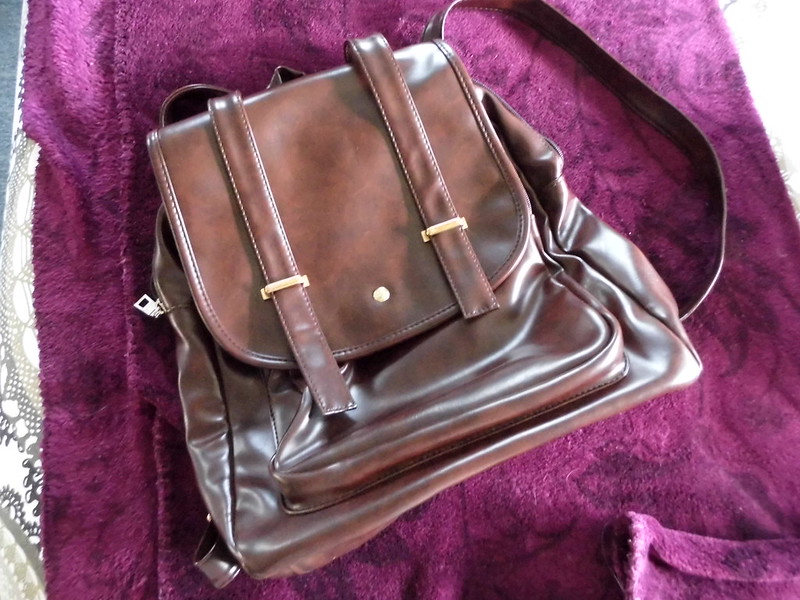 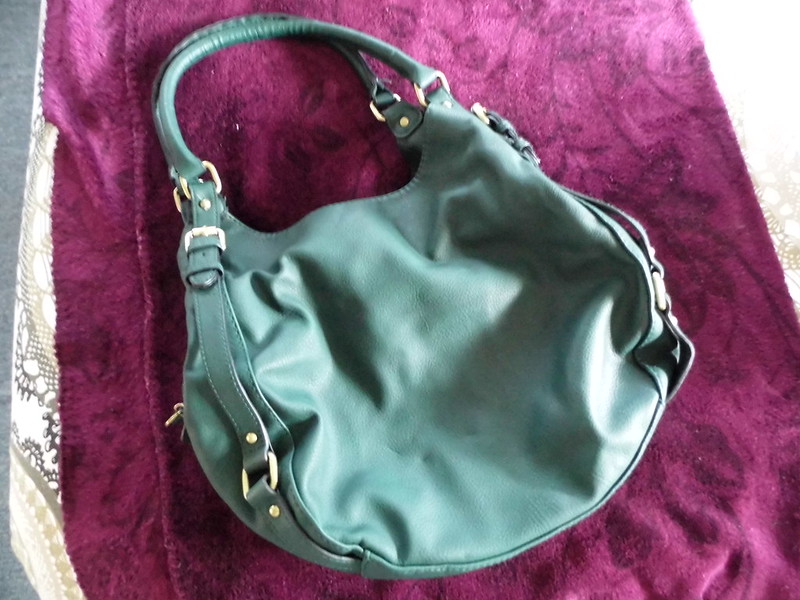 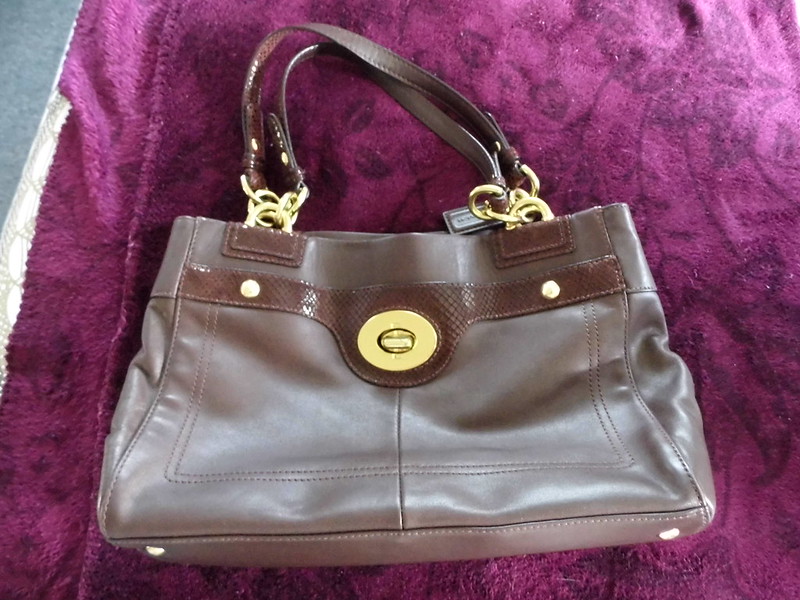 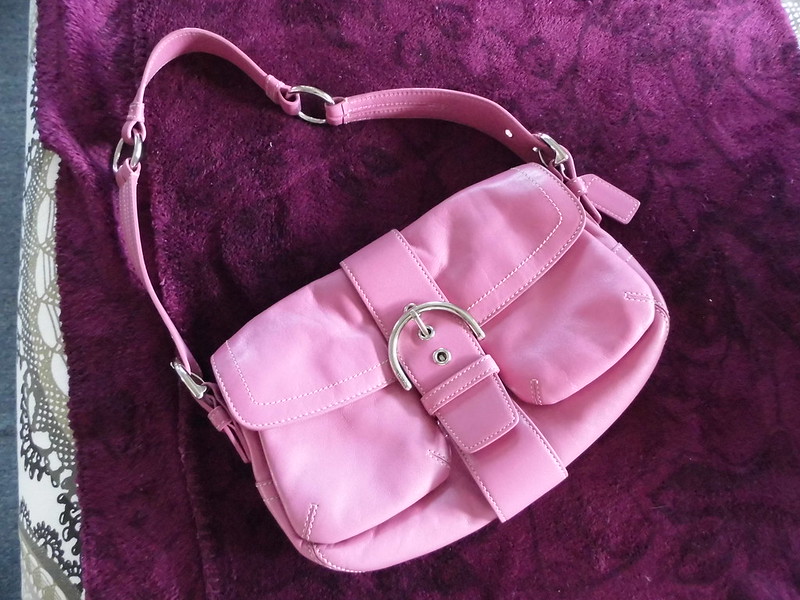 Firstly, a long overdue empties featuring a few items from Project Use it Up 🙂 (success!)

I also used up two fandom tea samples from Adagio Teas (decaf rooibos blends that were great for after dinner), and a pen(!). Being a pen hoarder, every pen is an accomplishment. 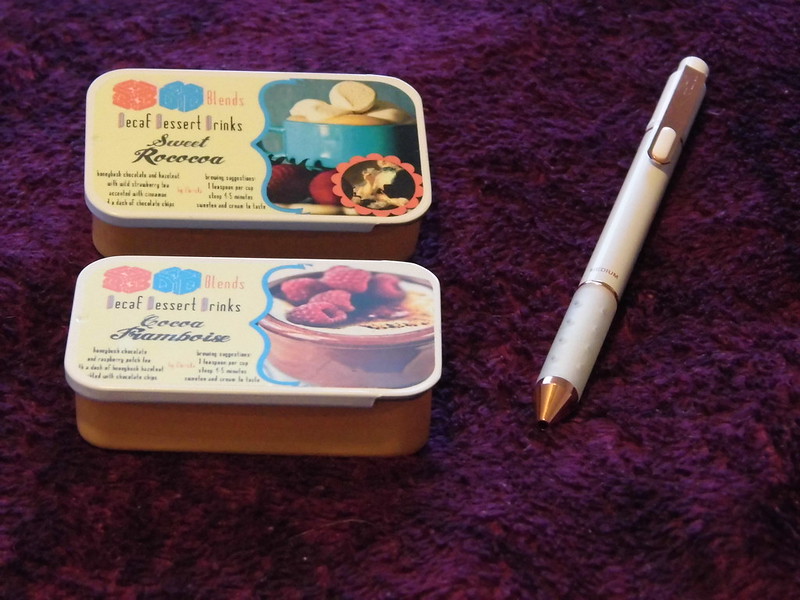 And, since I was on vacation, I decided to give my closet and makeup collection another cull. The result, 1 bag of clothes (mostly winter and workwear) and a few products that were lackluster or caused irritation (or both). 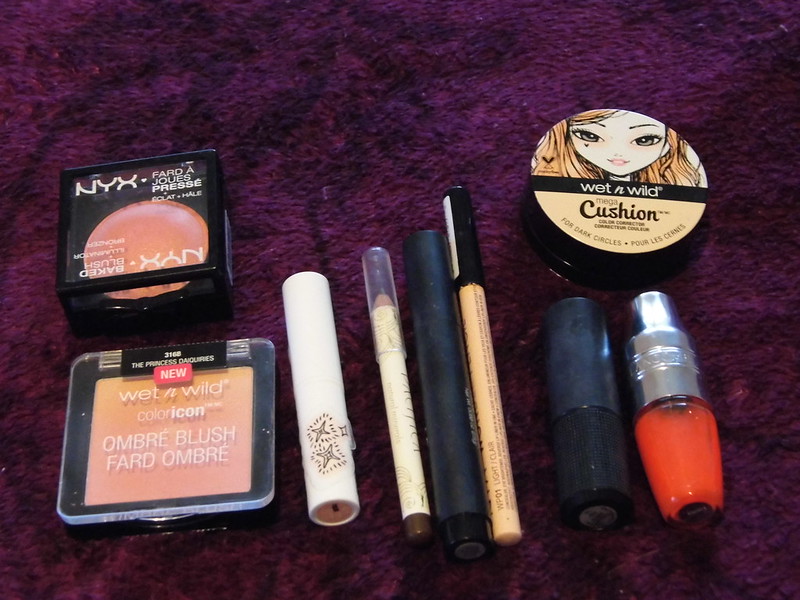 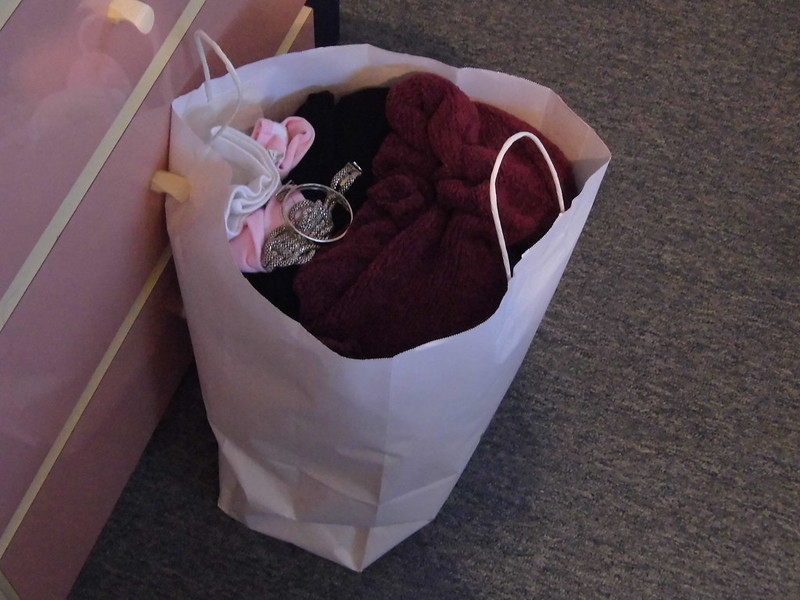 However, as it was my birthday on Tuesday, I did receive some newness, and made a few additions to my summer wardrobe.

Presents from the boy, new teas and a teapet (also Adagio), new treats, 1 tank, 1 blouse, 1 long-sleeve tee, a flashy necklace for flashy days, and a pair of strappy Crocs (my version of rain boots for work days). 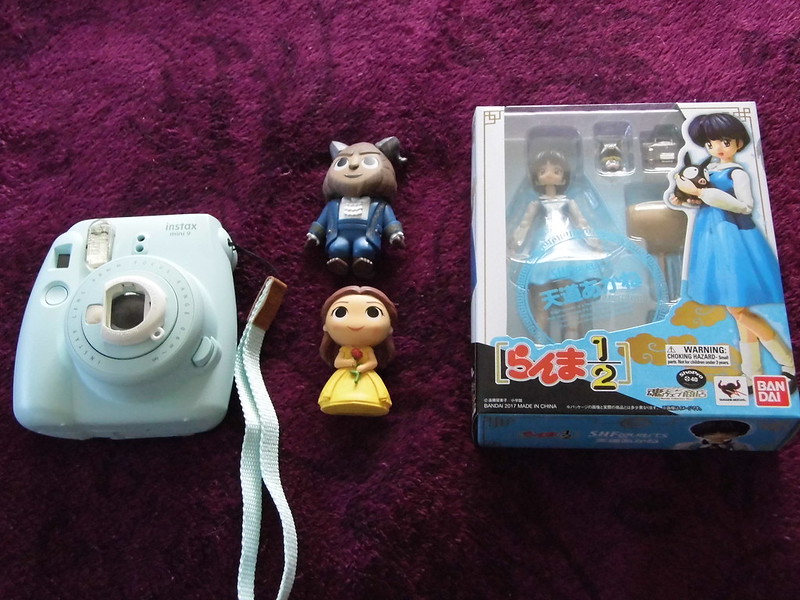 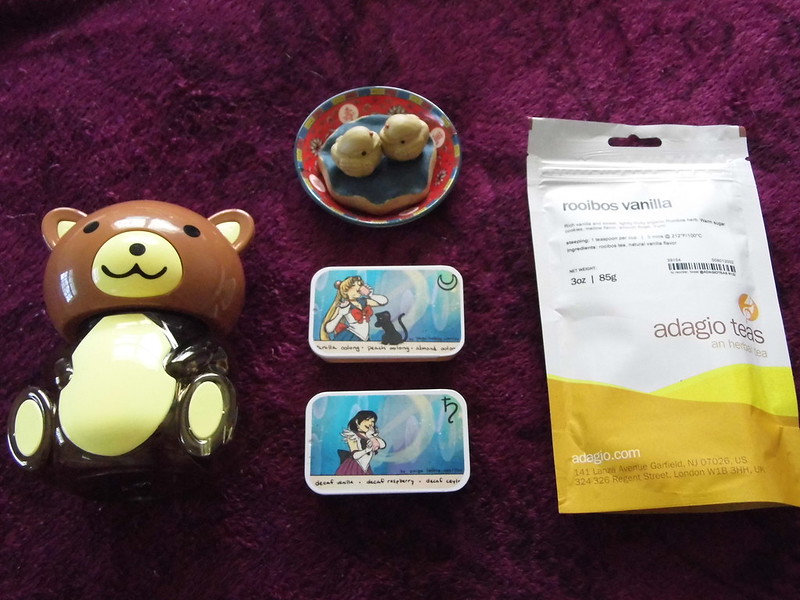 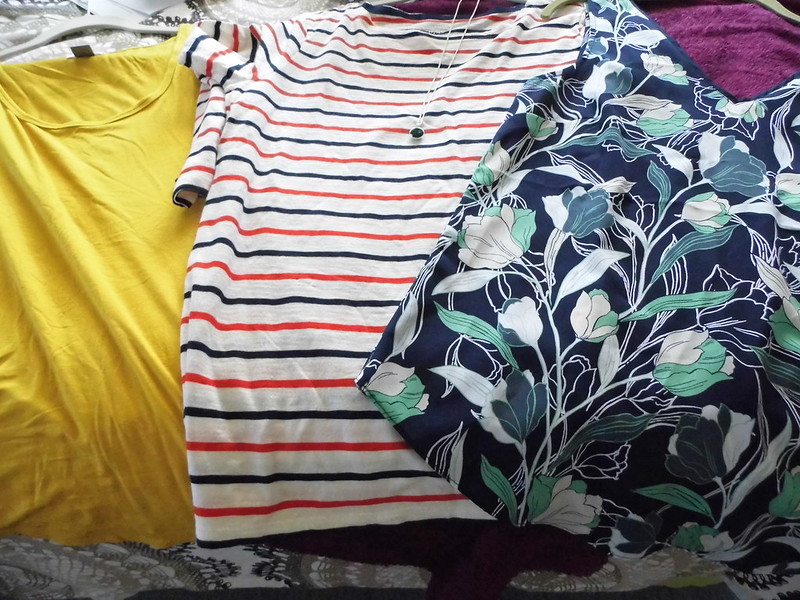 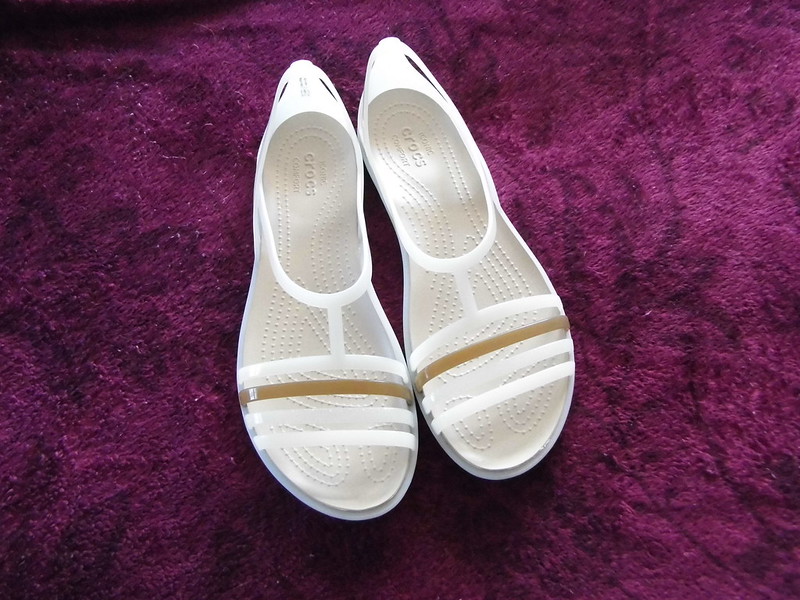 Also, a travel size lippie from Milk makeup in O.G. Red (love it!), a tissue mask, and my birthday gift from Sephora; plus, a tube of Kosas lipstick in Royal (these feel so soft and nourishing, with brilliant color). 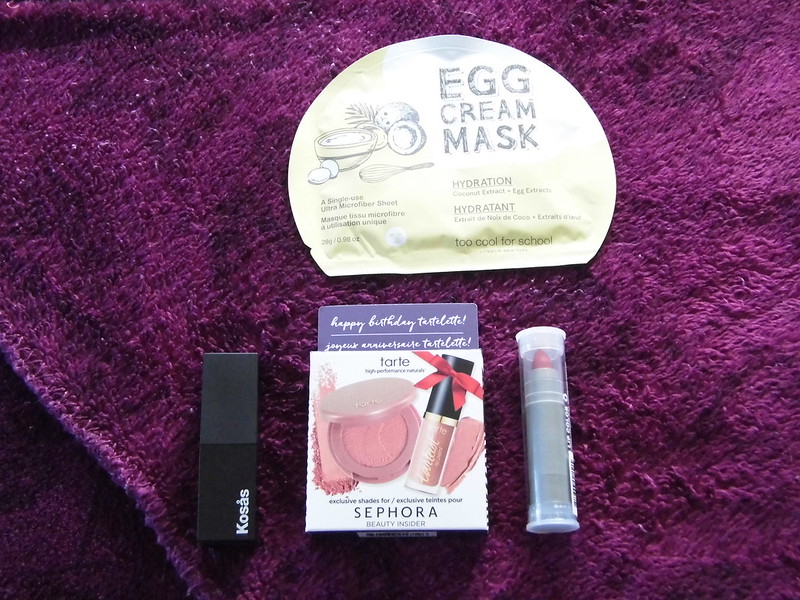